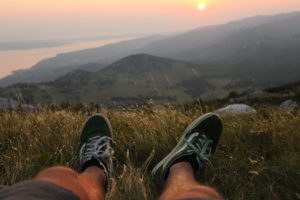 School is out.  Swim season is in full swing.  From my home, I hear the loud speaker blasting from the community pool.  Cheers erupt at regular intervals. Minivans and SUVs line the streets in the blocks adjacent to the swim club.  Like many parents residing in the suburbs, I enjoyed, sometimes endured, the annual ritual of Swim Team.  My daughters were only briefly interested in the glory of winning.  Mostly, they loved the Cup-of-Noodles and the ice-pops and talking to their friends under cover of gigantic towels.  Engagement in children’s activities is a good thing.  But often parents go too far in the direction of over-involvement.  Psychologists have studied the repercussions of what happens when parents are too attentive to their kids.  We describe this as enmeshment.

Focus on children’s activities often dominates family life in much of our country. We live in a child-centered era.  In the July 2 issue of The New Yorker, the article, ‘Spoiled Rotten’, Elizabeth Kolbert, profiled several families from diverse cultures.  How do parents of different cultures train young people to assume responsibilities?  Ms. Kolbert reports that the Matsigenka children from the Peruvian Amazon spontaneously help with a variety of chores, taking pleasure in their independence and helpfulness.  The Matsigenka culture prizes self-sufficiency and hard work.  They tell stories that reinforce these values.  The characters in their folklore are undone by laziness.

French kids will sit calmly through a three-course meal, while their American counterparts are throwing food before the main course arrives.  UCLA sociologists Carolina Izquierdo and Elinor Ochs assessed children’s participation in household responsibilities in a cohort of Los Angeles children. They found that no child routinely performed household chores without being instructed to.  Even when begged to do a chore, the vast majority still refused.

Here in the US, many well-meaning parents have inadvertently shaped their children to become dependent, manipulative and lazy.  As psychologists, we are often called to help restore harmony and balance to families in which kids rule the roost.

Summertime is often the most trying time for families. Frayed nerves, bored kids, too much time playing video games and watching TV, lead to thankful anticipation of the start of school for both parents and kids.  The comfort of daily routines is a welcome relief after a long, hot summer.

Inevitably, the return to structure and routine brings its own battles over homework and academics, in addition to the social strain of school.  There are ample opportunities for more squabbles and nagging, whining and complaining.  As the New Yorker article points out, parents often take the path of least resistance and do too much for their kids rather than face tantrums and meltdowns.

The fallout of raising over-indulged kids has to lead to a  ‘failure to launch’ for many young adults.  We have added this concept to our training and it is all too familiar in my practice.  Family therapy with adult children is now common.  While the economic troubles of the last three years have undoubtedly contributed to the large numbers of unemployed college graduates, but that is only part of the phenomenon.  As Hara Estroff articulated in Psychology Today, hovering “helicopter parents” are progressing to “jet-powered turbo attack model.” The looming pressures of getting accepted at a good college, SATs, extra-curricular cause yet more parental involvement.  With this degree of pressure, it is common for parents to let kids off the hook for chores and family commitments.

Teaching children to tolerate frustration, empathize with others and to persist in work is essential to raising independent young adults.  As psychologists, we help our clients to establish appropriate expectations for their kids and know when to step in to help and when to leave kids on their own.  In the next month, our clients will be transitioning from summer schedules to back-to-school routines.