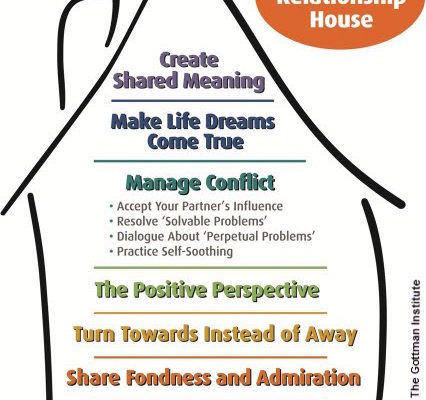 Healthy relationships are built on a strong foundation. In Northern California, where I live, houses are constructed on a solid footing to protect them in an earthquake. If a home is built on soft soil without proper engineering, strong seismic waves will cause a lot of damage. One way that a building is secured is by using lead-rubber bearings, which contain a solid lead core wrapped in alternating layers of rubber and steel. This combination of material is both strong and flexible, reducing damage.

Similarly, a relationship that has a strong but flexible foundation will withstand the slipping and sliding that accompany big life events, such as an illness, job loss, affair, or the birth of a first child. We need a core of strong support, but we also need elasticity for our relationships to flourish.

When a relationship is new, we tap into a powerful current of affection and attraction that makes it natural and easy to express appreciation for the other’s positive attributes. Meanwhile, we’re less attuned to the negative—but undesirable traits will be revealed in due time. What then?

The more we feel appreciated and respected by our partners, the happier our relationships are. I often tell clients who come to me for couples’ therapy that “It doesn’t count if it doesn’t come out of your mouth.“ In other words, you may think your partner is beautiful, or funny, or brilliant—but if you don’t say so, your partner doesn’t know.

The Magic Ratio: Five positive interactions to one negative

As with any skill, it takes continued practice to nurture a relationship past its first blush. The research of Dr. John Gottman shows us that we can create a strong foundation by keeping a balance of five positive interactions to one negative.

More-damaging negative interactions are weighted more heavily than others. Whining, for example, is a negative of one point, while disgust is rated at negative 3, and contempt at minus 4 points. Contempt is the worst because it conveys a huge disrespect for your partner as a person. It’s hard to recover positive feelings when contempt is prevalent in the relationship. As with all negativity, the antidote to contempt is genuine fondness and respect.

So how do you cultivate more-positive interactions when life can be so challenging, our partners sometimes so annoying, and irritation comes easier than appreciation? That’s where the flexible stability comes in. For example, when Ken and Josie came to therapy, they had developed the habit of harping at each other for little things. Josie would come home after a long day and see that Ken had left his stuff all over the living room. She’d gripe, and in response, he’d grouse at her for something she did or didn’t do. These negative interactions became so habitual that Ken and Josie were almost unaware of the pattern. But they were very aware of their unhappiness in the marriage.

In therapy, we focused on learning to express fondness and appreciation—not as rote words of thanks or praise, but from practicing mindfulness, attention, and remembering. In mindful relationships, we stop running from task to task on autopilot. Instead, we slow down enough to scan our environments and pay attention to what’s good about our partners, rather than fine-tuning our list of grievances.

Here’s an example from child-raising. We’re attuned to catching children in bad behavior, but it’s actually very important to catch them doing something right.

When my daughter was in middle school, she’d come downstairs as I was reading at the kitchen table. Often, I’d automatically ask her to empty the dishwasher or some other household task. One day when she came into the kitchen she said, “Mom, if every time you see me here you ask me to do something, I’m going to quit coming into the room!”

I let out a hearty laugh. In that instant, I saw myself through her eyes and realized the power of Pavlov’s classic description of conditioned responses. If I didn’t want to condition my daughter to stay out of the kitchen, I’d have to change my ways.

Similarly, in long-term relationships, try to catch your partner’s good deeds instead of simply noticing the irritations. In the case of Ken and Josie, they were able to recall the qualities that attracted them to each other and made a point of expressing their positive feelings regularly. By expressing more appreciation they noticed they were complaining less.

It feels good both to give and to receive heartfelt compliments. But they don’t have to be huge—even just a simple thank-you for doing the laundry counts. In fact, noticing and acknowledging those daily, routine things our partners do goes a long way to shoring up the foundation of our relationship house. Although it may feel awkward at first, positive interactions become automatic with attention and practice.

What are positive things you can do?

Find good things about your partner. This rewards what they’re doing right, and daily practice becomes ingrained in the brain and will therefore likely continue and reinforces continued positive interaction. It’s almost magic.

Express appreciation. For example, say thank you for stopping at the market or for taking out the trash. Even if these tasks arise from a couple’s division of labor, it’s still important to acknowledge them.

Pay attention. For example, listen to the way your partner tells a story about his/her day and respond with sincere interest, Don’t rush to change the subject to your own day or allow yourself to become distracted by phones, TV, or other attention snags.

Express affection. Physical affection tends to diminish as a relationship matures, but it doesn’t have to. We know that happy couples give and receive lots of affection through gestures like holding hands, stroking an arm or cheek, winking, and even just smiling. While these may seem obvious and simple actions, they’re often absent among couples who come to therapy—not a good sign. Getting back to affection requires letting go a bit, being relaxed, and trusting that your partner will be responsive and not pull back.