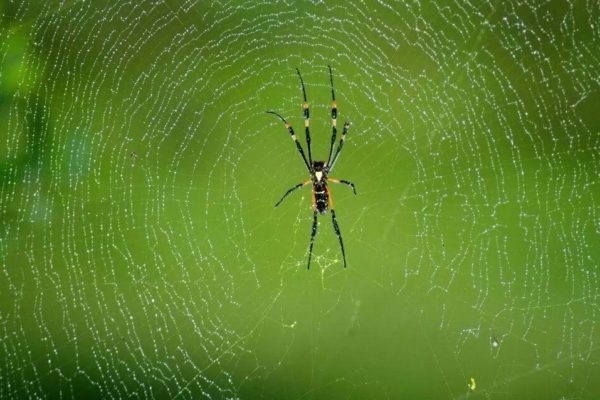 I spent my first two years as an undergraduate at a red-brick ivy-covered college. I remember very little of those two years, but not because I was partying. I was in a different kind of daze, induced by class sizes of up to 200 and studying for tests that required bloodless rote memorization, devoid of joy. The only professor I remember was my biology teacher, Mr. Jenkins. I was enthralled with his course. It was taught in an enormous lecture hall but did not feel big because Mr. Jenkins was so animated, clearly delighted in his subject.  He walked back and forth on stage in front of a screen displaying his photos of spiderwebs, flora, and fauna. Each intricate web was unique, many glistening with dew in early morning light, evening light, and moonlight. The slides were awe-inspiring.

During the first exam for this class, I sat stunned, tears falling down my cheeks, as I realized that I could not answer most of the questions. I had studied, yet I was unable to finish three-fourths of the test. Noticing my distress, Mr. Jenkins gently touched my arm and asked to see me after the exam.  In his office, he asked me how I studied for the test and I told him about flashcards and notes. That was all. Without chastising me for poor study skills, he showed me more of the beautiful photos he had taken with his son, who had died, he told me.  His kindness and his openness about the loss of his son had a big impact on me.  I realized I wanted more connection with my professors.  I wanted my education to include dialogue and engagement with the subject.

Somehow I had made it to college with no idea how to learn. I wasn’t even burdened with attention deficit disorder (ADD) or some similar diagnosis. What I assumed were good study skills were completely off base. It was an awakening.  I did not know how to memorize and assumed that I was incapable of being successful as a student.

Something in me persevered—I think it had to do with those dewy spider webs. Without consulting my parents or friends, and in a time that pre-dated the now ubiquitous larger web, I discovered an experimental college in the woods.

I entered The Evergreen State College because I wanted to learn without the focus on grades. I found a good fit. The class sizes were under 20 and the professors knew our names, and skied with us on Friday nights. They read our journals and interacted with us at all stages of the course.

I discovered I could learn. It developed imperceptibly at first as I read Montaigne and dialogued with him in my journal. I argued with Nietzsche and ranted at Machiavelli. I empathized with Faust and the urge for power and knowledge that led him to sell his soul. I fell in love with Don Quixote and Sancho Panza. Unlike my first two years of college, the last two are a vivid, still-living memory. While I did not return to the study of biology, I discovered a love of liberal arts.  Active engagement with the reading took organization and skill.  These were not simple books but through discussion and writing, they came alive.

How To Do What You Love

Engagement, I found, is the key to learning. Today’s children face enormous pressure to ace standardized tests and get into only the top colleges. If they have ADD/ADHD or other learning disorders, good medications and therapies exist for them. But do they care about learning? Do they love it? Do they know how to structure their time and work with their minds and hearts in the ongoing process that learning requires? In my practice, I have seen the results when kids fail to engage. They become dependent learners. Apathy and boredom are common.

Paul Graham—programmer, venture capitalist, and essayist—writes in   How to Do What You Love” about the intricate dance of finding meaning in what you do and sticking with difficult tasks. Nothing can be achieved without effort. Engagement is not about taking an easy road. We will serve ourselves and our children well by modeling discipline and love of learning. When my girls were little, we would watch spiders make their slow crawl over the lawn, in awe of their perseverance.  Tiny legs, and impossibly large grass obstacles, yet biology won out as they did want they are designed to do.  When our resident mockingbird would call from the chimney, we would run outside to listen to the concert. These simple experiences would later be woven into a story or a dinner discussion.  Bringing mindfulness to everyday life leads to a plethora of opportunities to find fullness in life, and in learning.