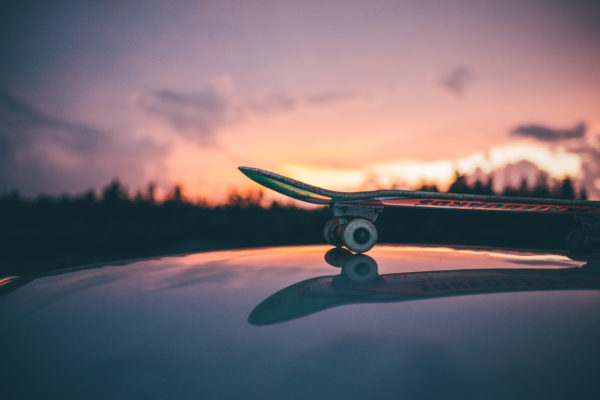 Last summer my neighbor’s son built a huge skate ramp right next to our property line. (We’re on different streets, so I’d never met him or his family.) First sawing, then drills, and eventually it was finished. I was glad for the wild Toyon bushes that grew high along a chain-link fence, blocking the view—but they didn’t block the noise. In use, a wooden skate ramp has a distinctive mechanical rhythmic sound. It’s similar to the poinging back-and-forth of a tennis match, but is contiguous and unvarying, except for sudden yelps from the kid or his friends.

My work as a psychotherapist is focused and can be intense. Quiet time in my garden is where I replenish by slipping into reverie and stillness. I love the silence, punctuated only by bird song and breeze-tossed tree branches. But now all I could hear, from morning to dusk, was the skate ramp. I tried to counter my disgruntlement by reminding myself ”At least it’s not a meth lab, and I could be glad he’s getting healthy outdoor exercise instead of playing violent video games and watching TV all day.” But in truth, my first thought when occasionally I heard a thud followed by silence was ”Yes! A broken ankle.” I did also think ”Oh no, he could be seriously hurt.” But then the skating would start up again, shattering my peace and sending me back inside, grumbling to myself.

It’s true that in many ways, mine was a problem of privilege. I was just irritated by a noisy nuisance, while some people are living in refugee camps or dodging bullets in their own neighborhoods. Many people have no quiet, private, beautiful place whose silence can be invaded. But most everyone can relate to feeling dominated by difficult or negative emotions like helplessness and anger.

Finding Another View: Opening a window

This summer, though, something happened to help me accept the noisy interruption of my peace. When a Monterey pine succumbed to bark beetles, the tree guys removed some of the Toyon bushes, opening the way to roll giant slices of the dead tree to the driveway. For the first time, I had a window to view of the skate ramp. The opening allowed me to see a shadow dance, the blur of back-and-forth movement, that accompanied the rhythmic skating sound. Actually seeing the annoying kid had the interesting effect of making me less annoyed. Suddenly he was a person, a kid in a baseball hat having fun, not just a maddening, repetitive sound.

I felt compassion; I wasn’t trying to feel compassion, talking myself into it, as I had before. Catching glimpses of the kid trullunking on his skate ramp allowed me to view it differently. I can now sit in my backyard and know that the neighbor kid is doing what he enjoys. I can occupy that space literally alongside him. It becomes background sound, along with the birdsong and an occasional leaf blower. And it also nice to notice when it stops.

How does my experience relate to suffering and compassion? Because it’s only when we can see the humanity of others and acknowledge our own uncomfortable thoughts that we can transform them. When I couldn’t see what annoyed me, all I could do was feel passive and irritated. Once the view was clear, I saw the source of my feelings and could accept it. A kid having fun. On a skate ramp in his backyard, which happens to abut my backyard. We all have hedges that obscure our view and block compassionate response.

In psychotherapy, and in mindfulness-based therapies, we learn to see that our emotional suffering and problems in life are not only caused by external circumstances but by the way we react to them. When our minds are dominated by difficult or negative emotions, we feel out of control. We employ defense mechanisms like withdrawal, projection, and demonizing the other. In contrast, meditation and practicing mindfulness is helpful because we cultivate the capacity to watch what is arising in our mind.

We sit with feelings and thoughts, noting but not getting caught up in them as we refocus on breathing and sitting. Witnessing our thoughts and feelings and allowing them to move on, rather than reacting unreflectively, gives us more emotional control, more choices about how to respond with our better, less overwhelmed selves. Meditation provides a window to compassion, something like the window through the hedges. We may begin to see that things are not so bad.

W.H. Auden’s poem “As I Walked Out One Evening” contrasts the idealistic hopes of lovers with the quelling voice of Time, which recommends looking in the mirror—accepting things as they are—and the healing that comes from putting aside illusion:

‘O stand, stand at the window

As the tears scald and start;

You shall love your crooked neighbour

With your crooked heart.’

With my crooked heart, I do.