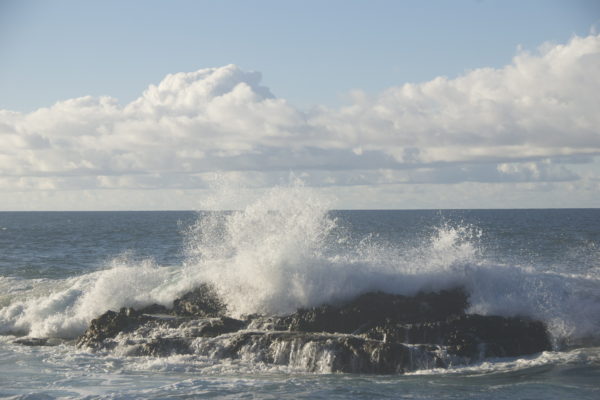 Recently during a visit to Hawaii, I read a pamphlet on ocean safety that described how to survive a rip current. They can travel 1-8 feet per second, meaning that in an astonishing 8 seconds, you could be carried sixty-four feet out to sea!  The instinct is to fight the rip, which only makes it worse because fighting something that powerful is exhausting.  After exhaustion comes panic, and in gulping for air, swimmers choke on seawater.

In mindfulness training, we talk about letting thoughts pass away like waves in the ocean. But what if your mind gets caught in a rip current? When the waves are so turbulent that they produce the conditions ripe for a rip?

Surviving a rip current depends on doing something that is contrary to instinct. The key is not to fight the current but to understand it and go with the flow—while at the same time, swimming across the strong current, parallel to the shore. Find a spot where waves are breaking on the shore, and let yourself be carried back to the beach by the same ocean that took you away. If you are unable to swim diagonally to the shore until the waves carry you back, then relax and let the current carry you out: it will eventually lose strength and, if you have conserved your energy, you can swim back.

The same instructions can be applied to mindfulness-based cognitive therapy. Many people come to mindfulness meditation, or Mindfulness-based cognitive therapy (MBCT) or stress reduction (MBST) depressed, anxious, or dealing with panic disorders. Asking them to sit still and silently focus on their breathing is an enormous task.  We talk about letting thoughts pass away like waves in the ocean, but what if your mind gets caught in a rip current? Often, the thought stream is too strong for the breath to anchor them, and MBCT clients get carried out to sea by their ruminations and worries.

When the mind gets carried away in a panicky current, it feels as if there is no escape. At those moments, the urge is to give up, even to quit the practice. So, when feelings threaten to overwhelm you during meditation, turn to wisdom learned from the sea.

Remember that a rip current doesn’t pull swimmers underwater; it carries them away from shore in a narrow channel of water. When your mind begins to ruminate, think of the thoughts as a channel, not the whole ocean. That channel can be overcome by allowing yourself to relax and accept the strong pull. Fighting it will wear you out. Notice where the shore is, pay attention to the flow of the water as it moves to the shoreline, and think of your body as the shore, grounding you. You are solid and firm. Ruminative thinking, like the rip current, will lose its strength eventually, and you can return your focus to your breathing. Each time you resist your instinct to fight the overwhelming thoughts and just accept them, you will be training yourself to be a stronger and smarter swimmer.

How to Survive a Rip Current

Remain calm, do not panic. Should you find yourself caught in a current that’s taking you away from where you entered the water, remember that panicking will only tire you.